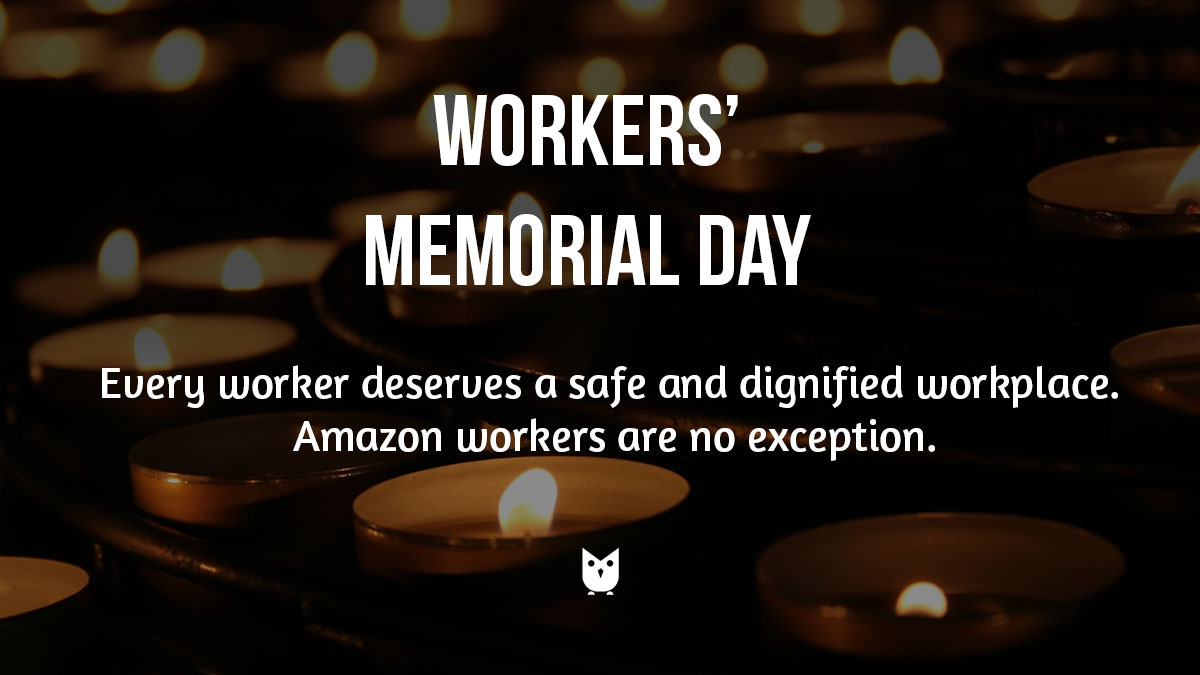 Today, on Workers’ Remembrance Day, we honor and remember the lives of Amazon workers lost, injured, and otherwise harmed this past year.

We remember the six workers who were killed last December in Edwardsville, Illinois. These deaths were preventable, but were not prevented due to Amazon’s negligence of basic worker safety drills and National Weather Service warnings. Instead, the corporation urged workers to stay inside facilities, or to continue delivering packages through the storm.

We remember Amazon workers in Staten Island and in Bessemer, at two facilities leading the way in organizing and unionizing fulfillment center workers, who were killed on the job.

We remember Amazon workers who were killed on the job outside the United States: in Poland, the UK, and likely countless other places that have not been widely reported.

We remember Poushawn Brown, who died from COVID after being assigned to test other Amazon workers for COVID. We remember other Amazon workers who were not protected during the height of the pandemic, and who were reliated against when they spoke up. Black workers were twice as likely to be retaliated against for expressing concerns about working conditions during the COVID-19 pandemic.

These injuries and deaths are not incidental to Amazon’s business model. Rather, workers’ suffering is a direct result of Amazon’s $1.4 trillion business, which is predicated on squeezing every cent of margin out of every sale by:

Innovating punitive management practices and invasive surveillance systems to watch, isolate, intimidate, threaten, and punish workers into submission, in particular against Black and brown workers. In fact, New York Times reporting found that in 2019, Amazon workers at JFK8, the first warehouse in the nation to vote to unionize, was made up of a workforce that was more than 60% Black or Latinx. And at JFK8, Black workers were almost 50% more likely to be fired.

Injuring workers at awe-inspiring rates by pushing them to work at breakneck speeds and grueling physical conditions, never before seen in its sector in history. A new report by the Strategic Organizing Center found that:

Hiring, injuring and exploiting, and then disposing of workers at spectacular rates. A New York Times investigation found that even before the pandemic, Amazon was losing about 3 percent of its fulfillment workers each week, which means Amazon had to replace its entire workforce every 8 months.

The human toll of Amazon’s greed is grotesque and, like much of its business practices, its high tech sweatshops normalize a workforce culture others will replicate to compete.

Today, we remember the workers whose lives have been lost to make Jeff Bezos an extra buck:

Every worker deserves a safe and dignified workplace. Amazon workers are no exception. We stand with workers who are organizing and fighting back for a world where worker remembrance days are not necessary, including those starting by unionizing their workplace.